In Spain, companies and freelancers are losing a considerable amount of money each year as they are not making the effort of recuperating the VAT for small expenses.  Official invoices are required for VAT recuperation, but asking one for a small expense is a time consuming business.
As an answer to that problem came the DevoluIVA mobile application. It consists of a network of existing establishments where employees and freelancers usually make small expenses,  like restaurants, taxis and gas stations. Users can recuperate the VAT by photographing their receipt, which generates an invoice within 48 hours. Receipts of businesses that are not part of the network can still be photographed and managed in the app, but will not lead to an invoice.
This application is composed of two parts: it’s an expense management app, and it’s an establishment finder, linked to the app’s large network of establishments.

Presentation of the original mobile application

Our client wanted to adapt its mobile application to the newest usability standards.
We needed:
- An extensive comprehension of the existing application, it’s users and it’s competitors
- An evaluation of the app in the light of Jacob Nielsen’s usability guidelines, the WCAG 2.1 accessibility guidelines and Material Design guidelines
- A hi-fi design prototype to present to our client

This project took place in a team of five researchers, in a time frame of 9 months. In turns, we took up the role of project leader, in which we planned one or more iterations according to agile scrum methodology. Our client would evaluate our deliverables at the end of each section of our research, which allowed us to continue on the same page.

First, the five of us went through the app in detail, and were able to report a total of 62 findings that possibly or certainly were infringing on usability. We ranked and prioritized them according to severity.
‍
Conclusion: The main concerns at this stage were the legibility of the app’s iconography, on which it heavily relies, it’s navigation and it’s confusing search fields.  As a next step, we decided to go make a quick user test (Guerrilla-style) to see if we could confirm our hypothesis or gather more insights.

Example of a finding from our report: when writing a wrong name of a restaurant, the search function doesn’t provide feedback. It doesn’t react, which frustrates the user.

This test is cheap and fun to do, as we just went out in public spaces and asked more or less random people for their time.  However, this test needs good preparation, and we practiced the interview beforehand. We drafted a task scenario: users were asked to execute basic tasks of the app such as to register a receipt and to find a restaurant from DevoluIVA’s network.  In a time frame of 2 hours, we were able to interview 4 people, validating 8 hypotheses from our usability analysis.

Conclusion:
- confirmation that iconography and navigation were indeed confusing.
- realization that information architecture could be improved while registrating a receipt.
- confirmation that the search function should be levelled up to current usability standards, among others because it was not providing feedback when misspelling a word or when an element didn’t exist in DevoluIVA’s network.

Example of confusing icons in the original application

Accessibility was a major element in our analysis. Not only does it contribute to a more inclusive digital world, it also improves the app’s overall usability. The legal obligations around accessibility are becoming stricter every year. Moreover, respecting it contributes to a better social image of the enterprise. We tested the app according to the WCAG 2.1 guidelines, the usability guidelines for accessible web design of Jakob Nielsen, 2 kind of screen readers and an accessibility scanner.
user testing.

Example of a finding from our report: some alert messages were undetectable when using a screen reader or magnifier, like the one below the screen. The message would disappear after 2 seconds. Moreover, the contrast is not according to WCAG 2.1. standards.

We already had gathered many new insights on how to improve the app’s usability, which we could immediately incorporate in the new interface design. However, there were still some questions left:
- would users need more information or features on the expense management part of the app? For example, an option to create reports from their receipts.
- what makes users use DevoluIVA’s network of affiliated businesses? This is quite important as it has a direct link with the app’s return on investment.
- is the app clear as it is, or does it need an onboarding?-

We decided to go further with two testing groups.
A first group of people matched the user profile of the app, but had never used it before. We searched for commercial profiles, that submitted restaurant, gas and taxi expenses monthly. We elaborated a task scenario for the current app, and an in depth interview to know more about the general pain points of submitting receipts.
The second group consisted of experienced users. We conducted an in depth interview concerning their experience with the app, and asked about their dreams and future views.

Conclusions:
- a need for functionalities that make up the new industry standards, such as being able to make and share reports out of your receipts, or a search function with an autosuggestion feature and feedback in case of errors.
- except for freelancers, employees don’t have an incentive to consume in DevoluIVA’s affiliated businesses! This is quite substantial as this means smaller ROI for the business. We had to propose solutions to our client to improve this. We detected frustration as the network was not always updated, and a need for better search filters.
- problems with finding a QR code, necessary for registering receipts from gas stations. Even experiences users didn’t use it or didn’t know of its existence.
- the app could benefit from a small and simple onboarding
- the bright red used as brand color is perceived as aggressive and should be toned to a warmer and more inviting red

Another way to explore our app’s usability was through competitive analysis, or benchmarking.
It also gave us valuable inspiration for our new interface design and it’s features. The tricky part was that this app had no real competitors in se.
As the app is a hybrid of two distinct functions, we splitted the benchmarking part in two types of competitors:
- expense management app : Expensify and Captio, leaders in the market
- (restaurant) finder The fork, Tripadvisor, Googlemaps, with excellent usability in their search functions

Conclusions:
- a need for functionalities that make up the new industry standards, such as being able to make and share reports out of your receipts, or a search function with an autosuggestion feature and feedback in case of errors.
- a use of a warmer tone of copy and colors.
- to contact helpdesk, a contemporary style chatbox or messagebox looks more natural

From the data the client gave us, we detected that the expense management part was used the most, and the summary was barely used. Although new users were attracted to the “gadget” of having a sort of dashboard, the experienced users don’t seem to use it much. We did adjust the summary dashboard, but didn’t put a lot of energy in it because of its little use.
Although this part is crucial for UX investigation, and success measurement, we couldn’t  draw many conclusions. This was due to the Google Analytics’s configuration within the app and the restrained access to the data. 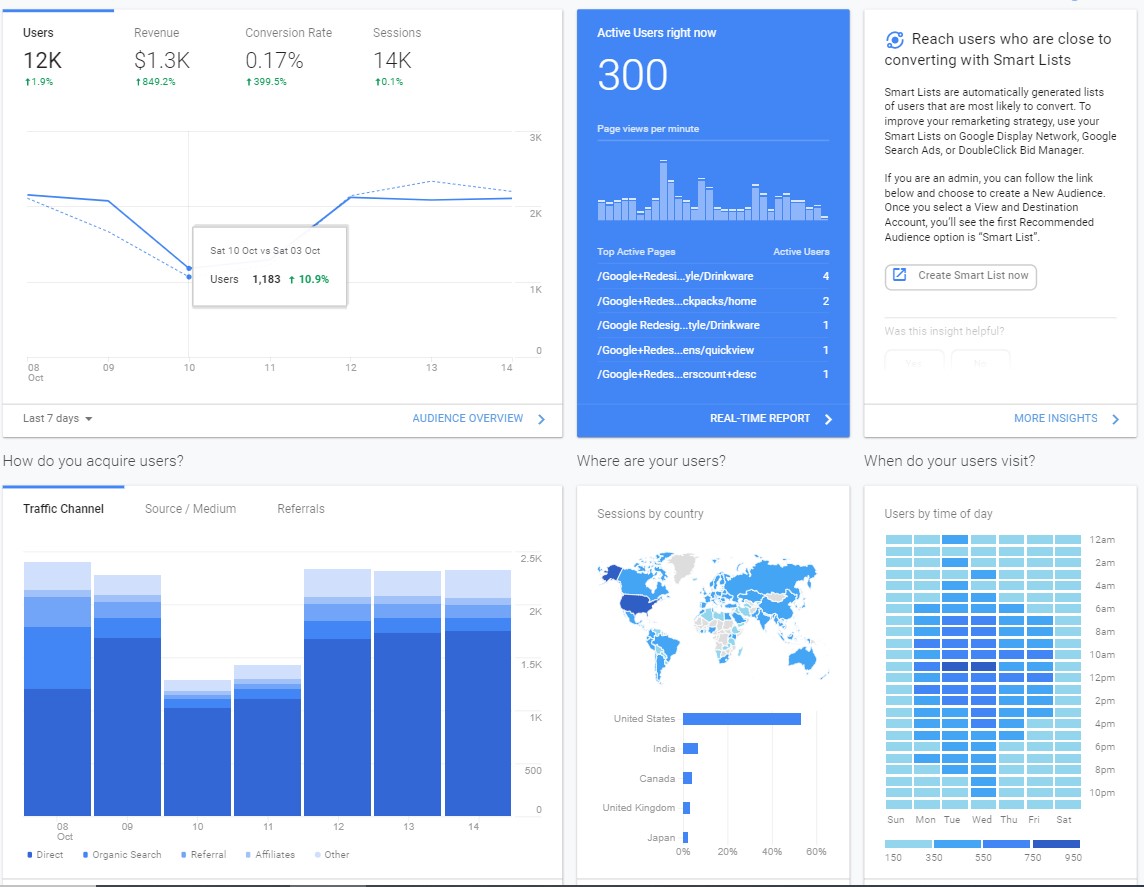 Image from a Google Analytics dashboard

From the user interviews, we could form two personas: one with a personal drive to consume in DevoluIVA ‘s affiliated businesses to recuperate VAT. A freelancer fits that profile.
A second persona that doesn’t need to think about VAT, and just wants an overview of his expenses. This would be an employee. At this stage, we could build a new roadmap for our wireframing. 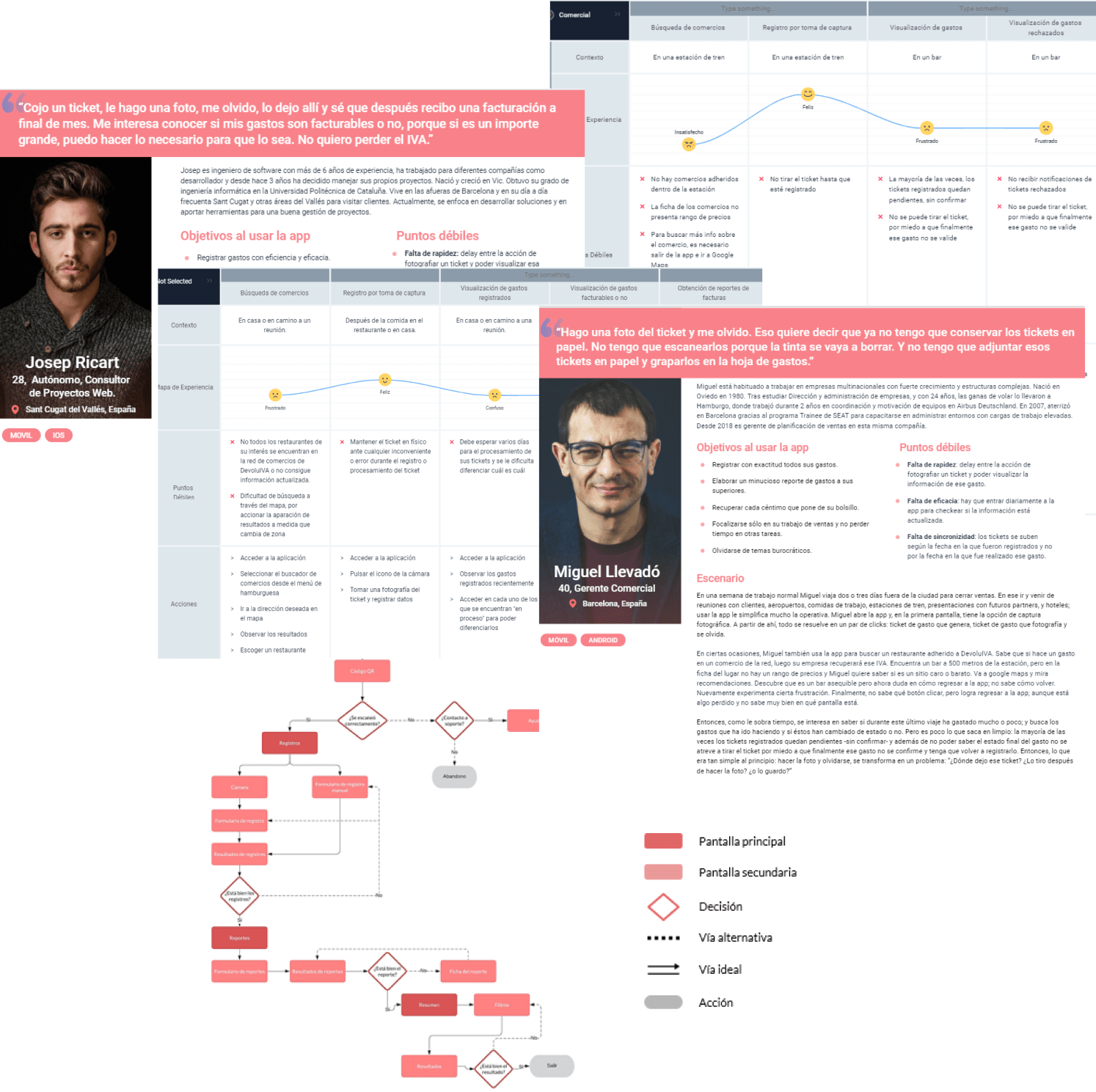 As we detected a lack of incentive for users to use and consume in the network of the app, we started a brainstorming proces, and came up with  micro-interactions and new features to include in the new app.
- micro-interaction to facilite the process of suggesting a missing business
- micro-interaction to facilite the process of reporting that a  business closed down
- grateful notification when the business has been added or updated to the network
-  addition of filters, approved by other users, linked with the use of restaurants in a professional context, like it’s speed of service during lunchtime, it’s quietness, or it’s ability to make business lunches for bigger groups. Although our client was open to the idea, this idea needed further testing with users and it’s cost of development had to be investigated. 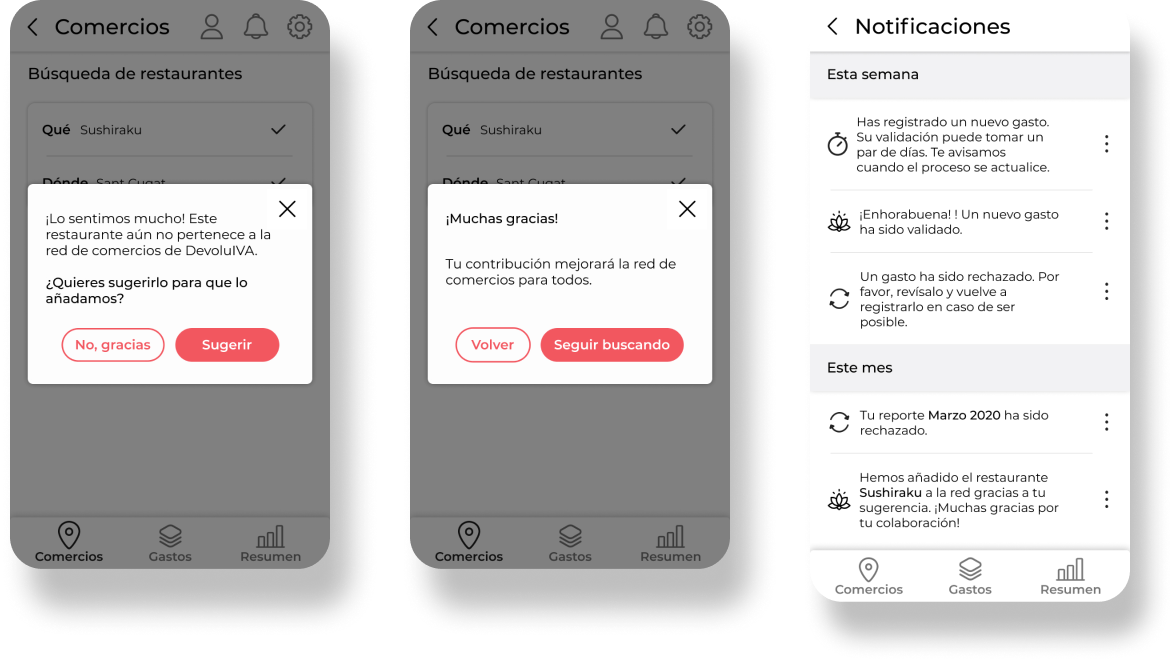 Examples of small interactions to enhance users to update the network. When a users searches for an establishment that is not part of the network, it will immmidiatly get the option to suggest it, and be thanked for it.

After wireframing on paper and designing a low-fidelity prototype, the fun phase of designing took place.
I'll explain the frames through user stories:.

USER STORY 1: Josep (freelance and consultant) wants to set up a working lunch with an important client.
He wants to find a restaurant belonging to the DevoluIVA network to be able to recover the VAT of his expenses. A colleague had recommended him a typical Catalan establishment, near the area of his client’s office. So, through the advanced search bar of the application, he tries to locate it. However, he discovers that the restaurant does not belong to the DevoluIVA's affiliated network.
He suggests this business to DevoluIVA: maybe he can try the place next time he sees his client?
Next, he looks for an alternative in the app's listing. He’ll go for a tapas bar, and filters a professional and quiet setting, in a medium price-range.
Finally, he finds a place that is perfectly adapted to the type of meeting he had planned, in the right area, and the right price! He adds the place to his “Favorites” list. 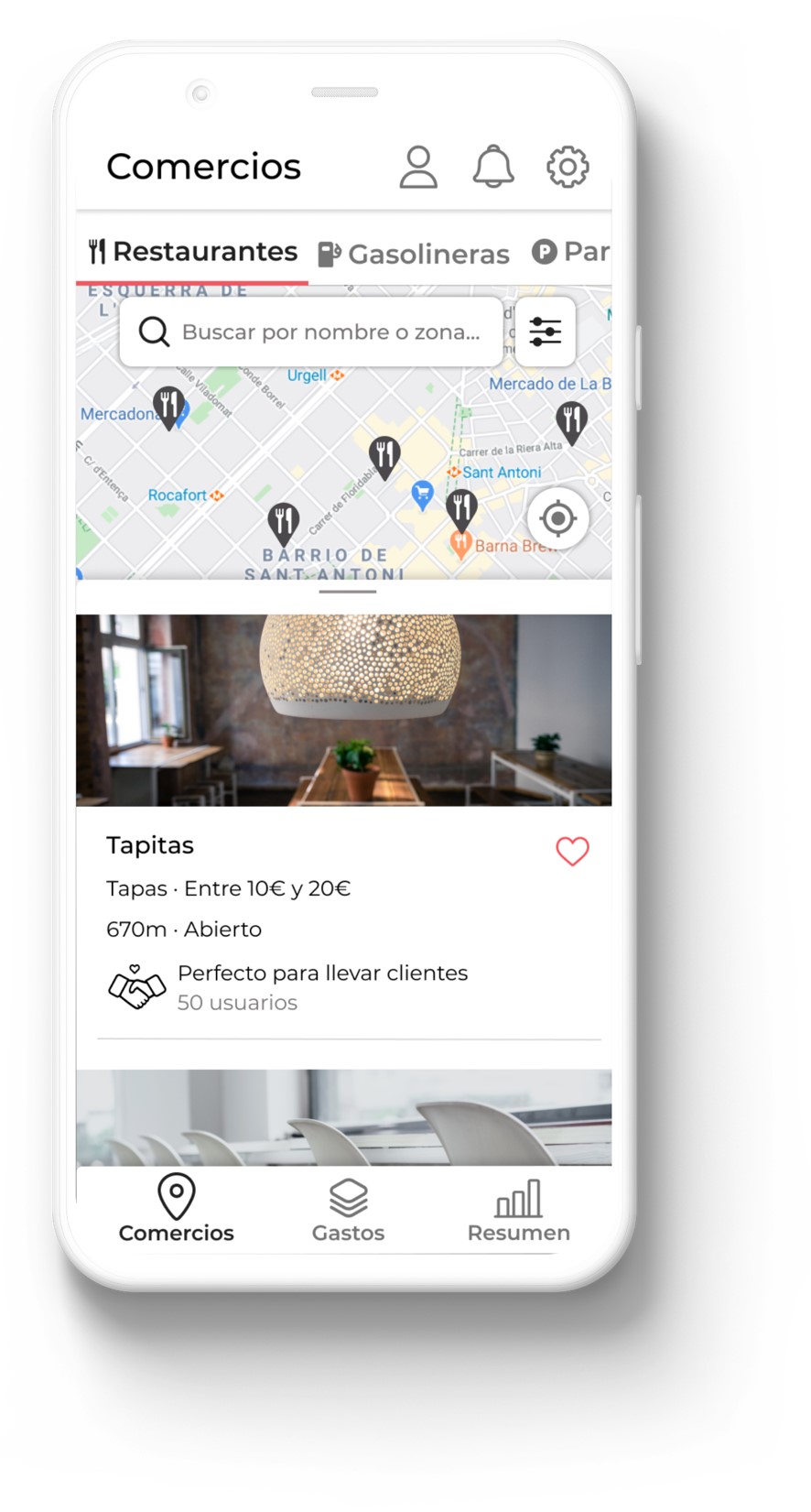 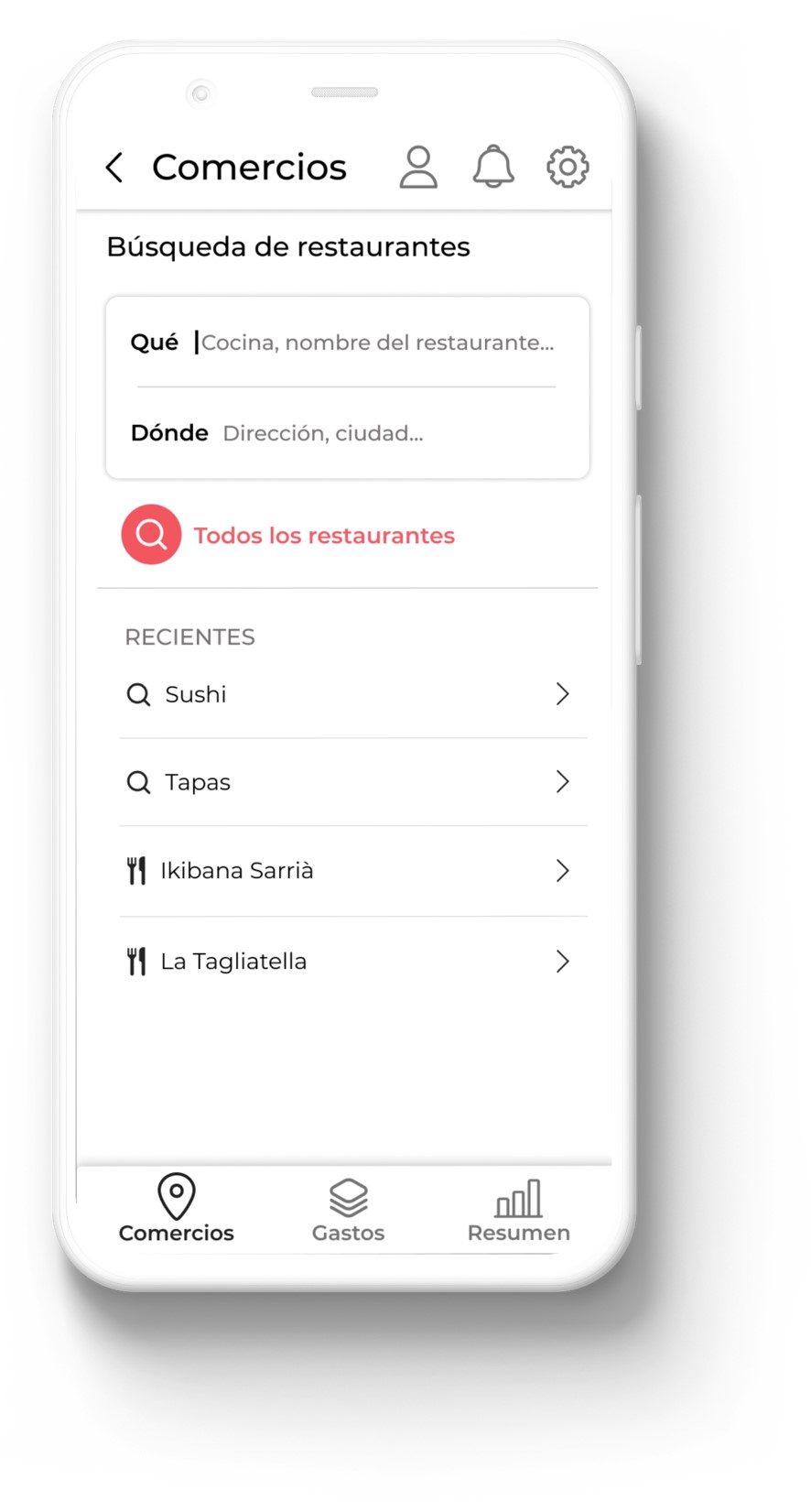 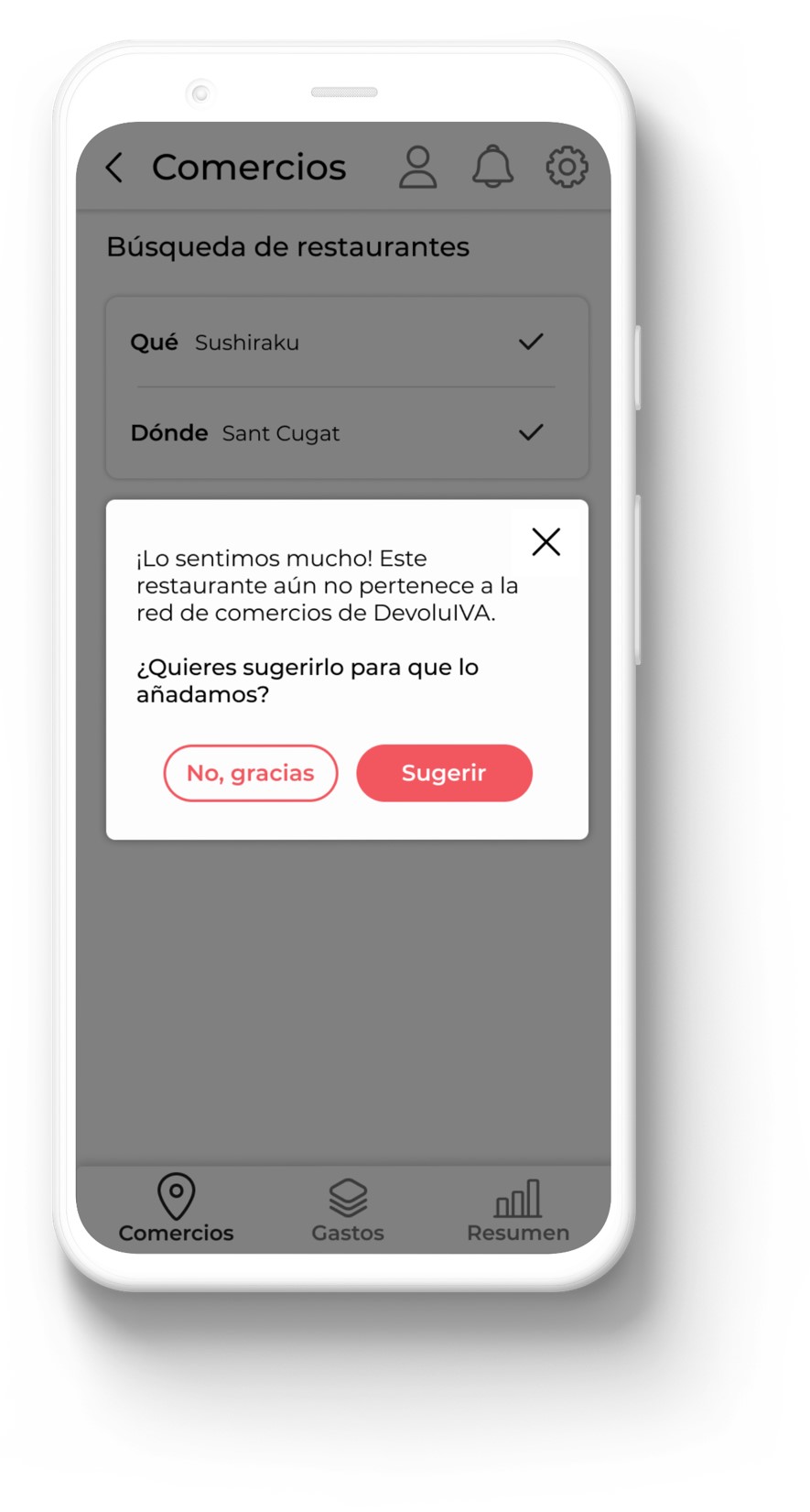 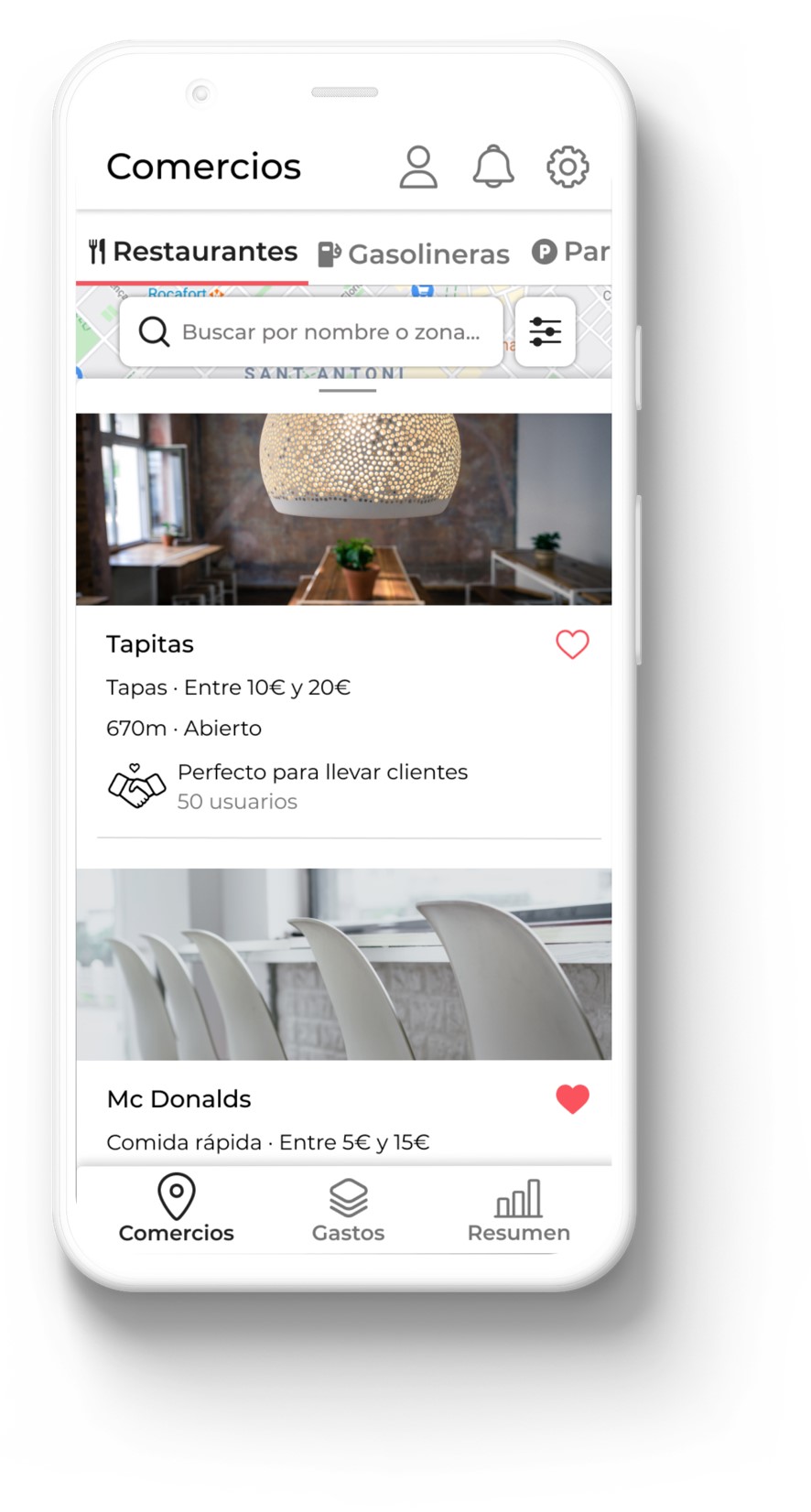 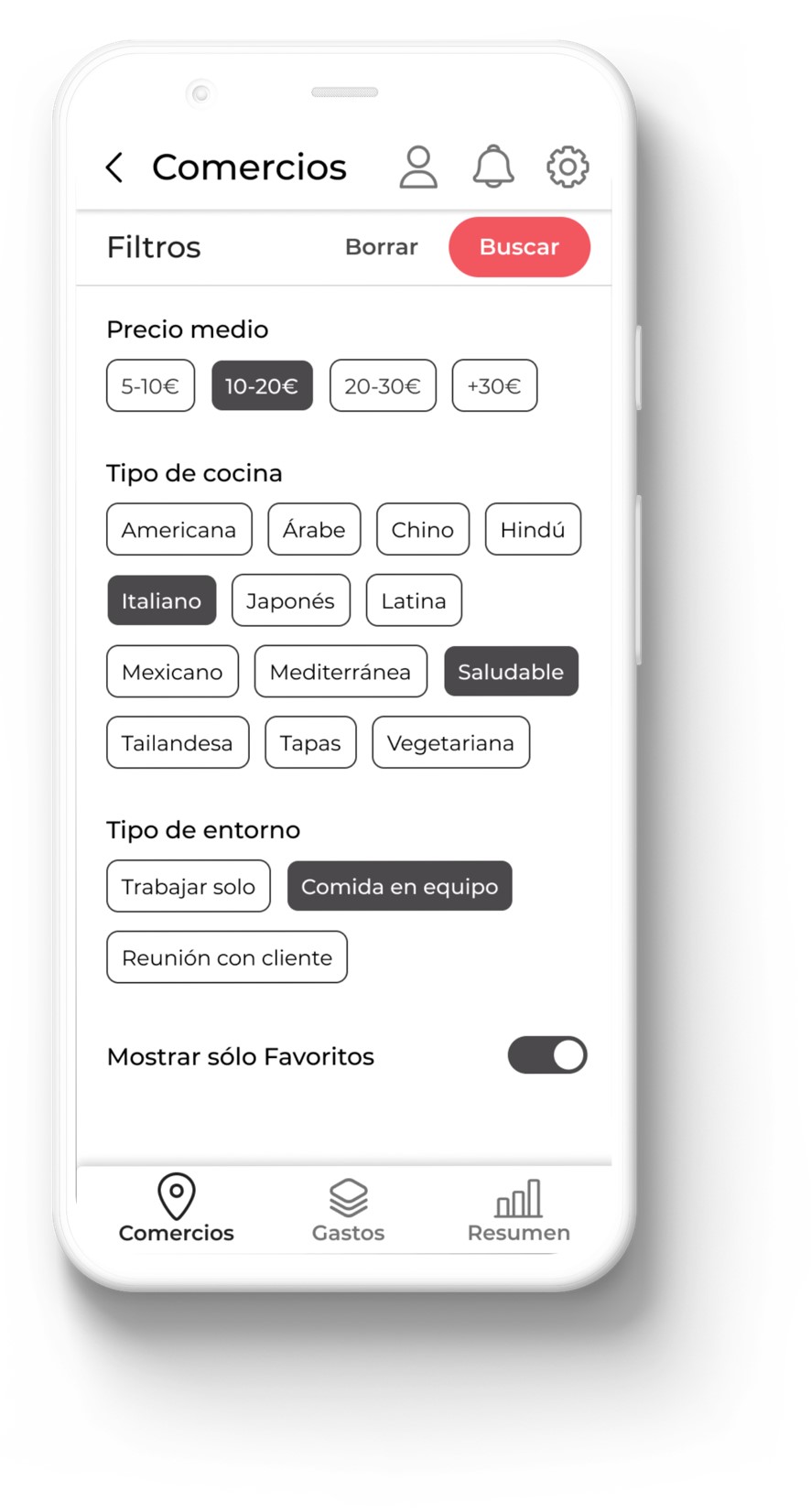 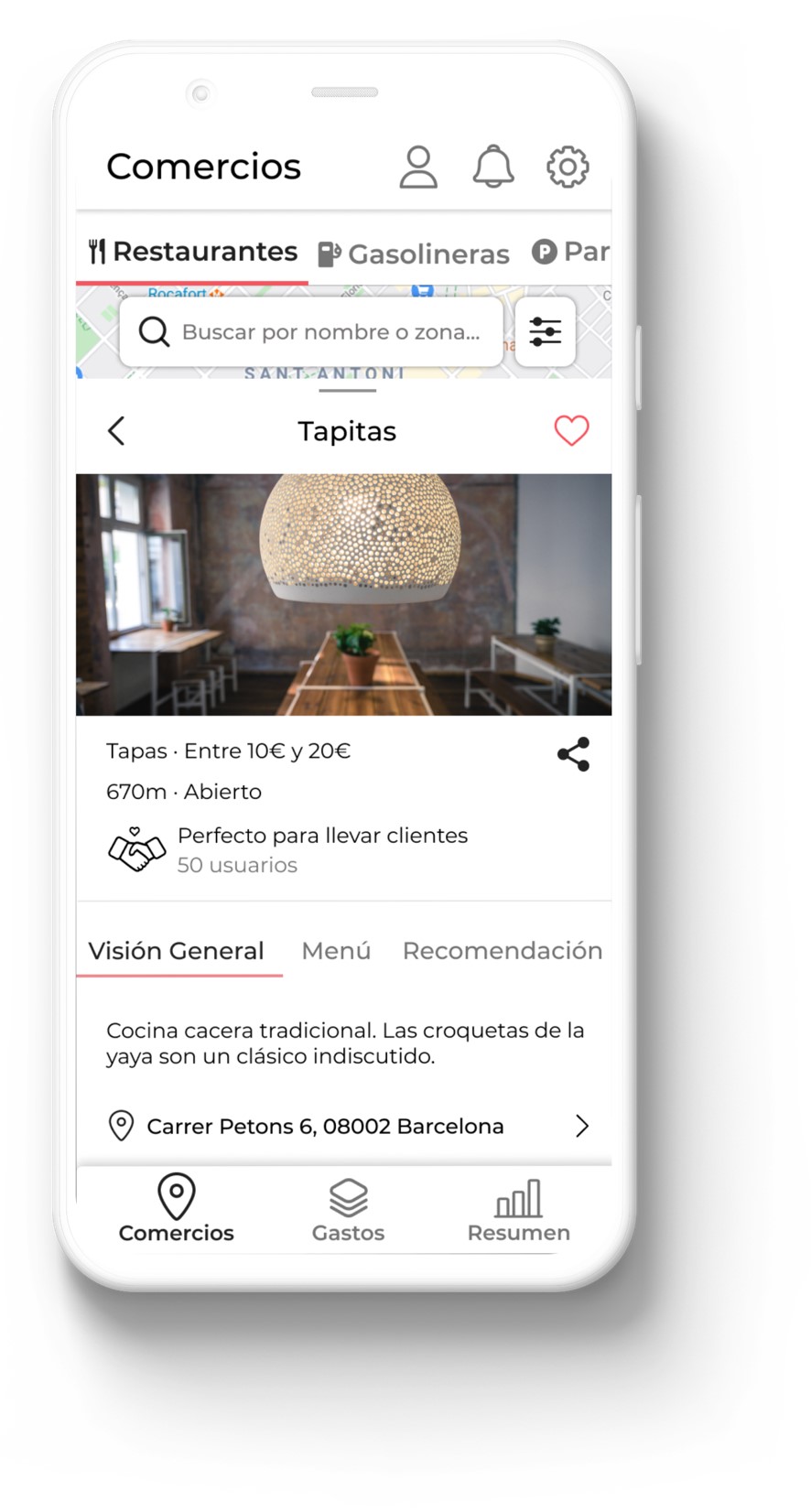 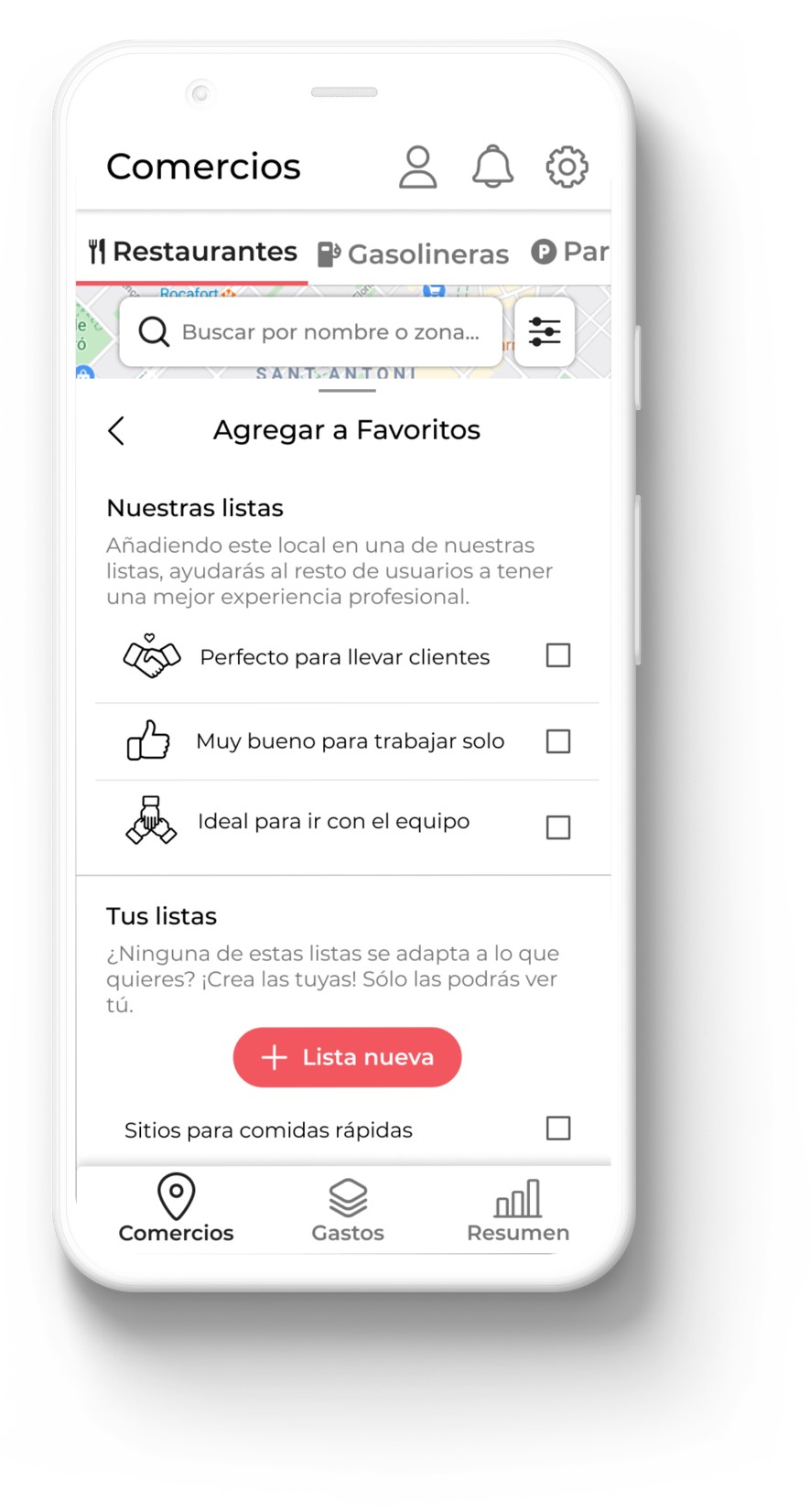 USER STORY 2: Miguel (Commercial Manager) just finished a business lunch: he registers his expense in the app and associates it with his client.
Returning to the office, he decides to fill the tank at his usual gas station. There’s a cue. He takes advantage of this dead time to organize: it is the end of the month, and he needs to hand in his monthly expenses to management.
He creates a monthly report and adds the corresponding records. Now he needs to wait for approval from HR before recovering his expenses.
Before closing the application, he consults the summary of his monthly expenses just to have an idea of the amount of money he should be getting back.
After a three-minute cue, it’s his turn to tank. He fills it up, goes to the gas station staff, opens the DevoluIVA application, accesses his profile and shows his QR code to record the cost of gasoline.
Finally, when arriving at the office, he inputs the mileage expense, and links it with the appointment with the client: 30 km between round trip. There are no more tickets to register. They are all safe in the expense list. 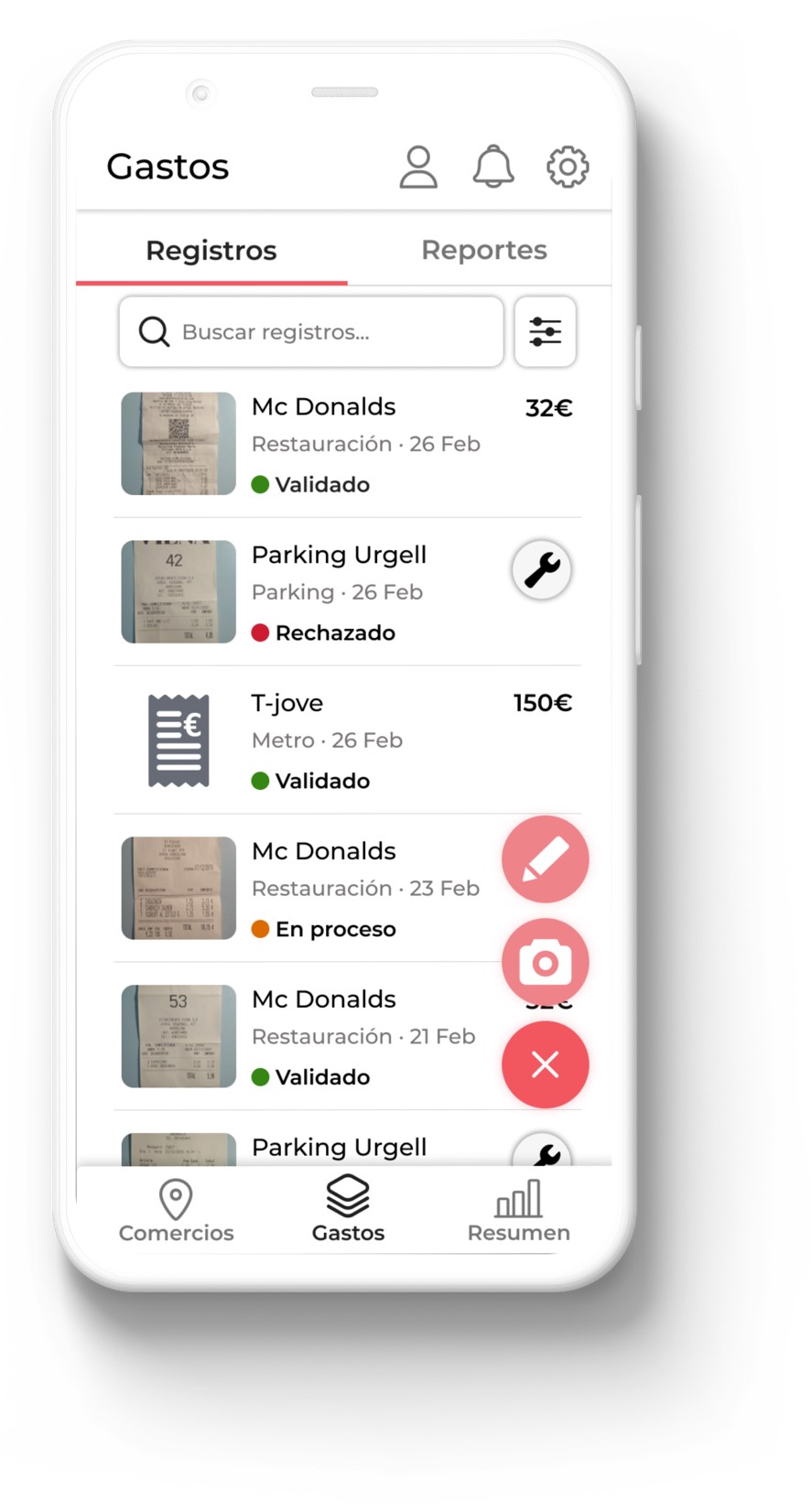 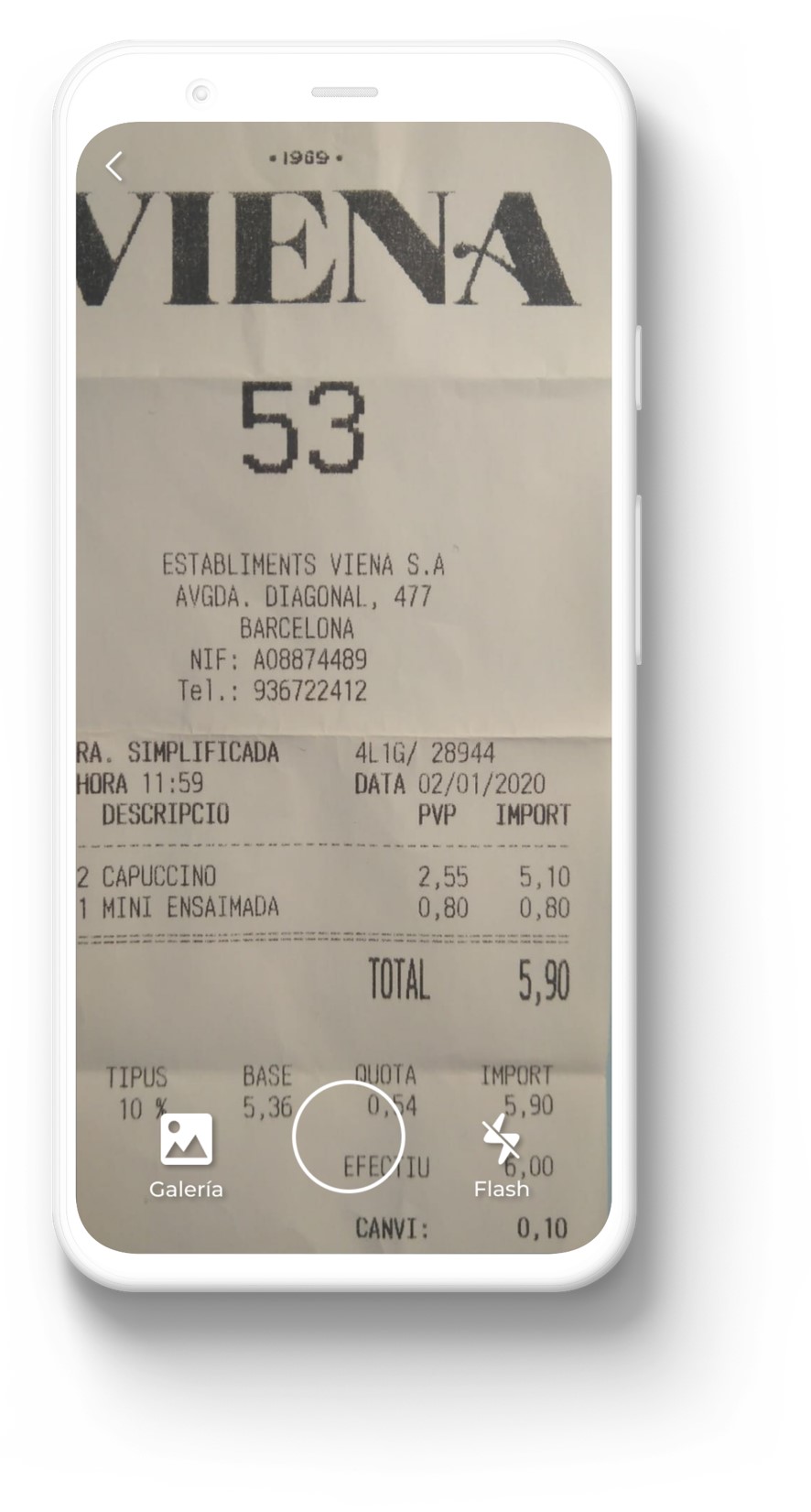 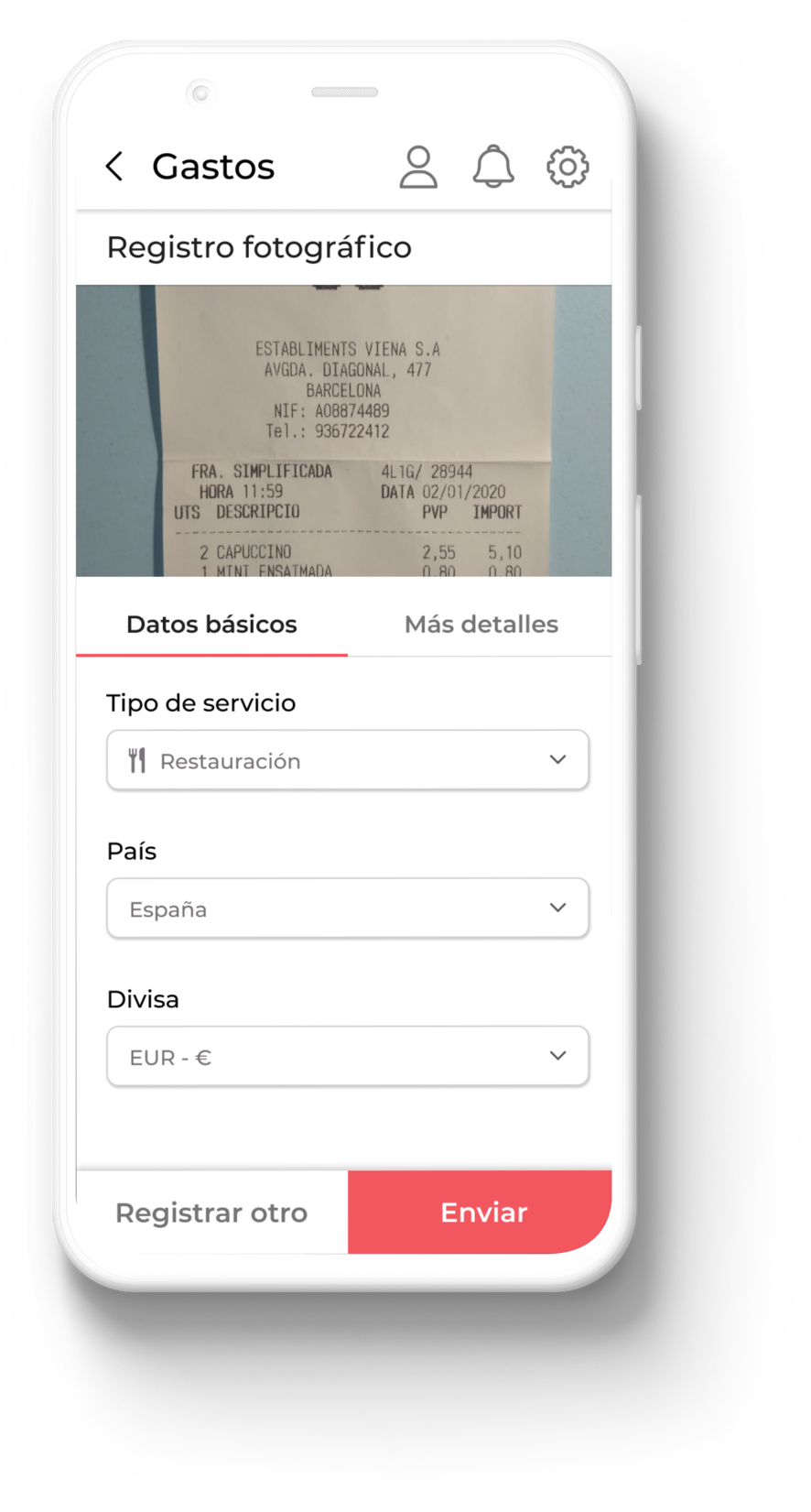 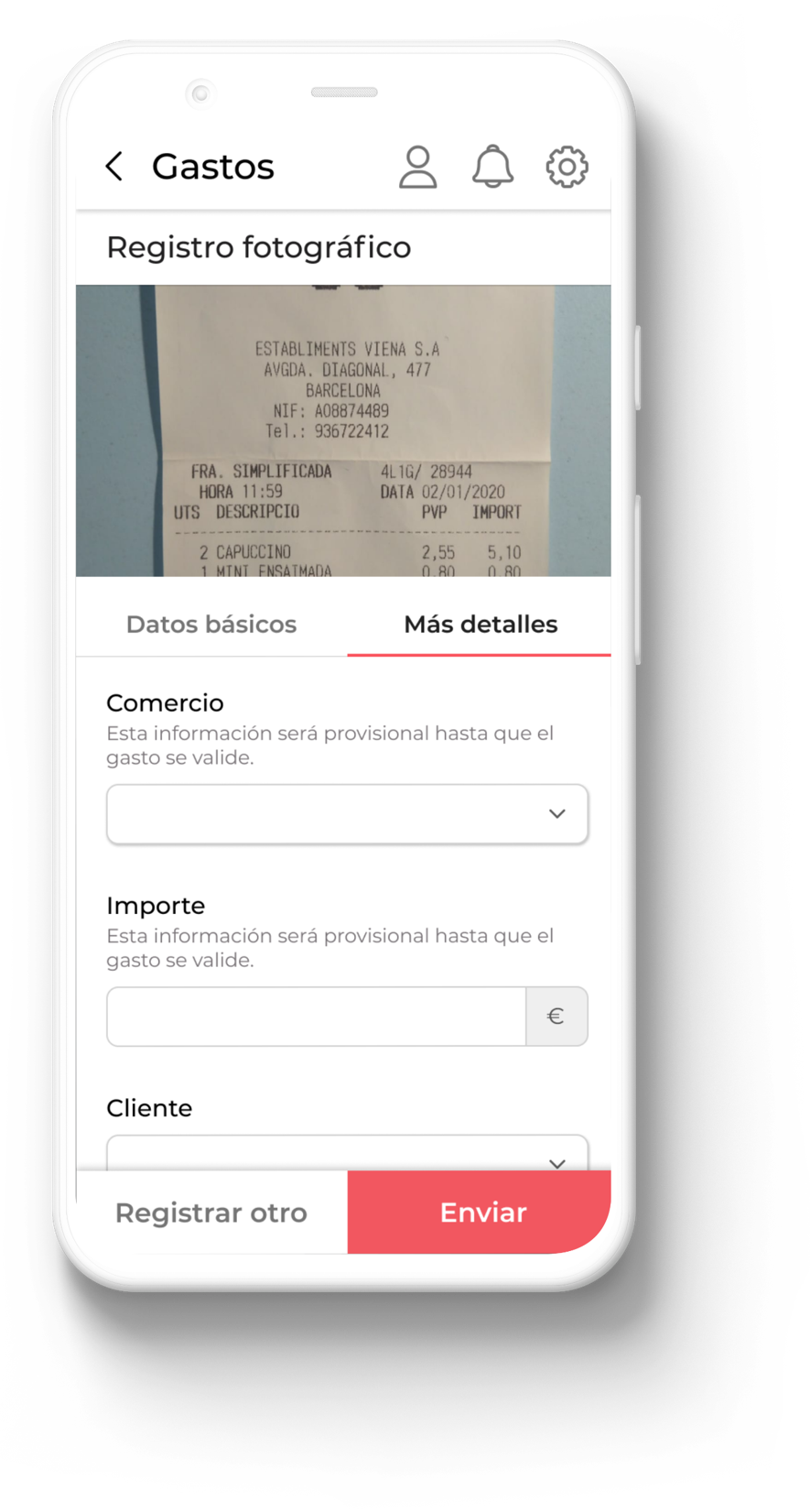 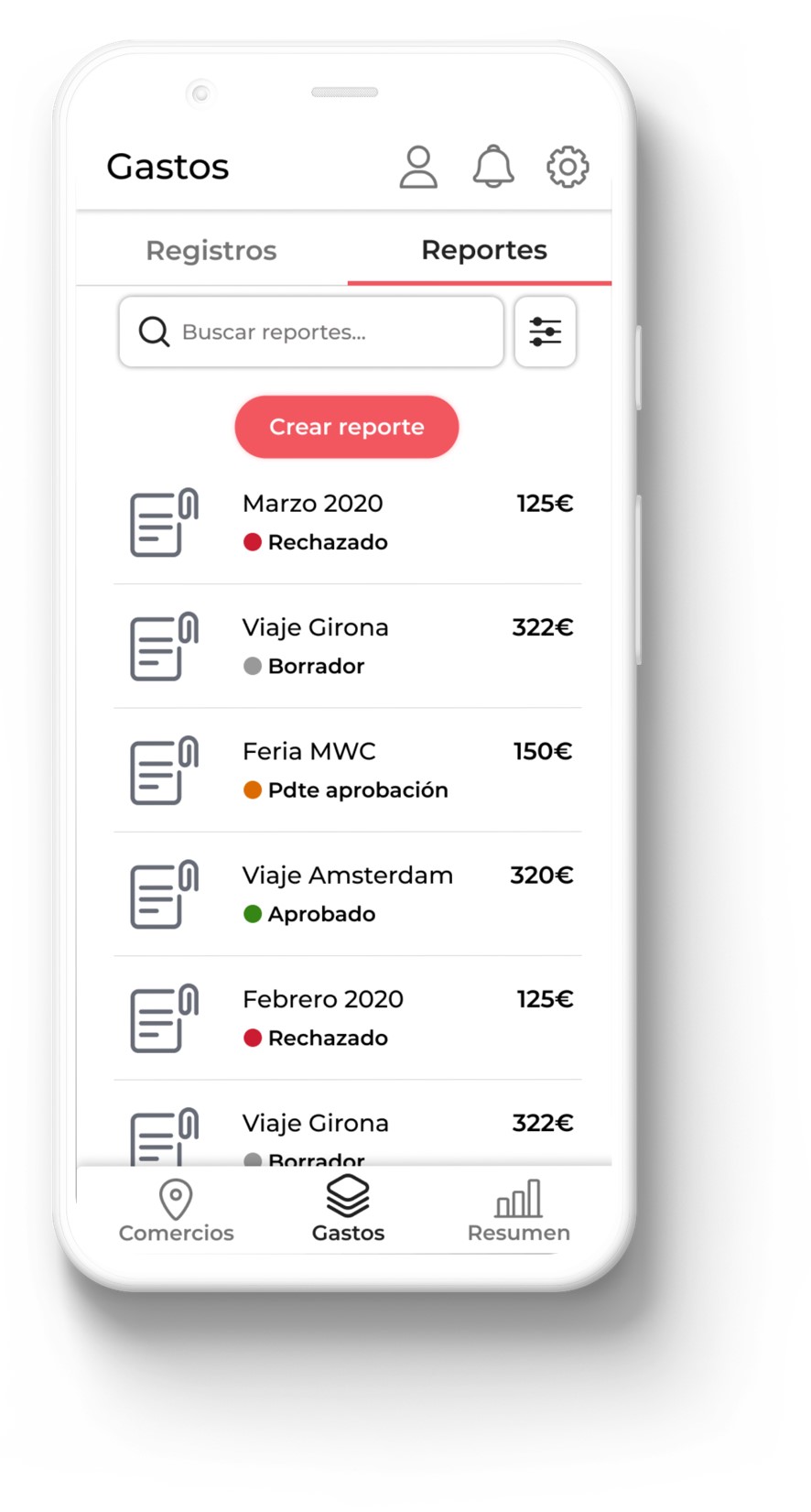 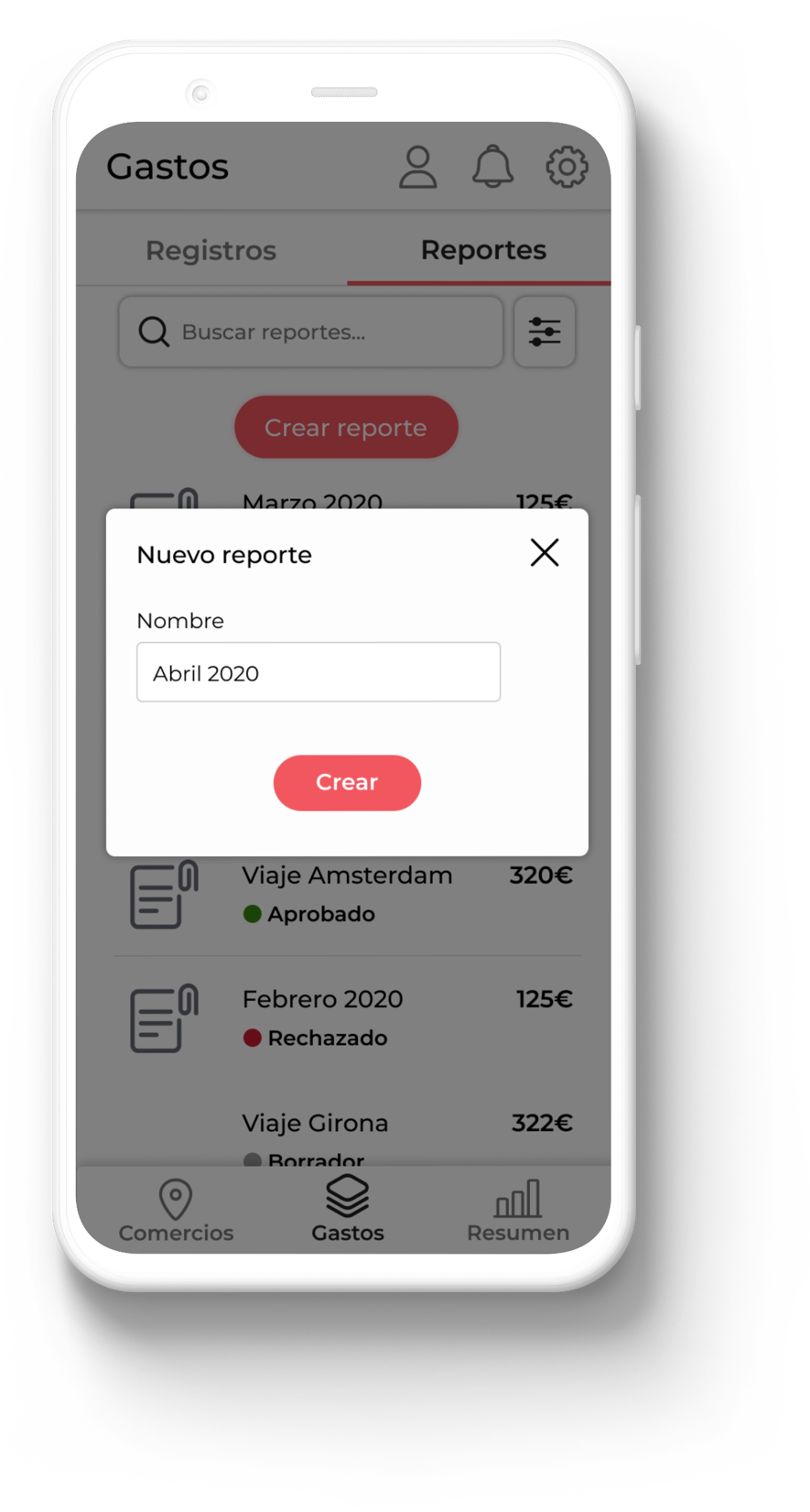 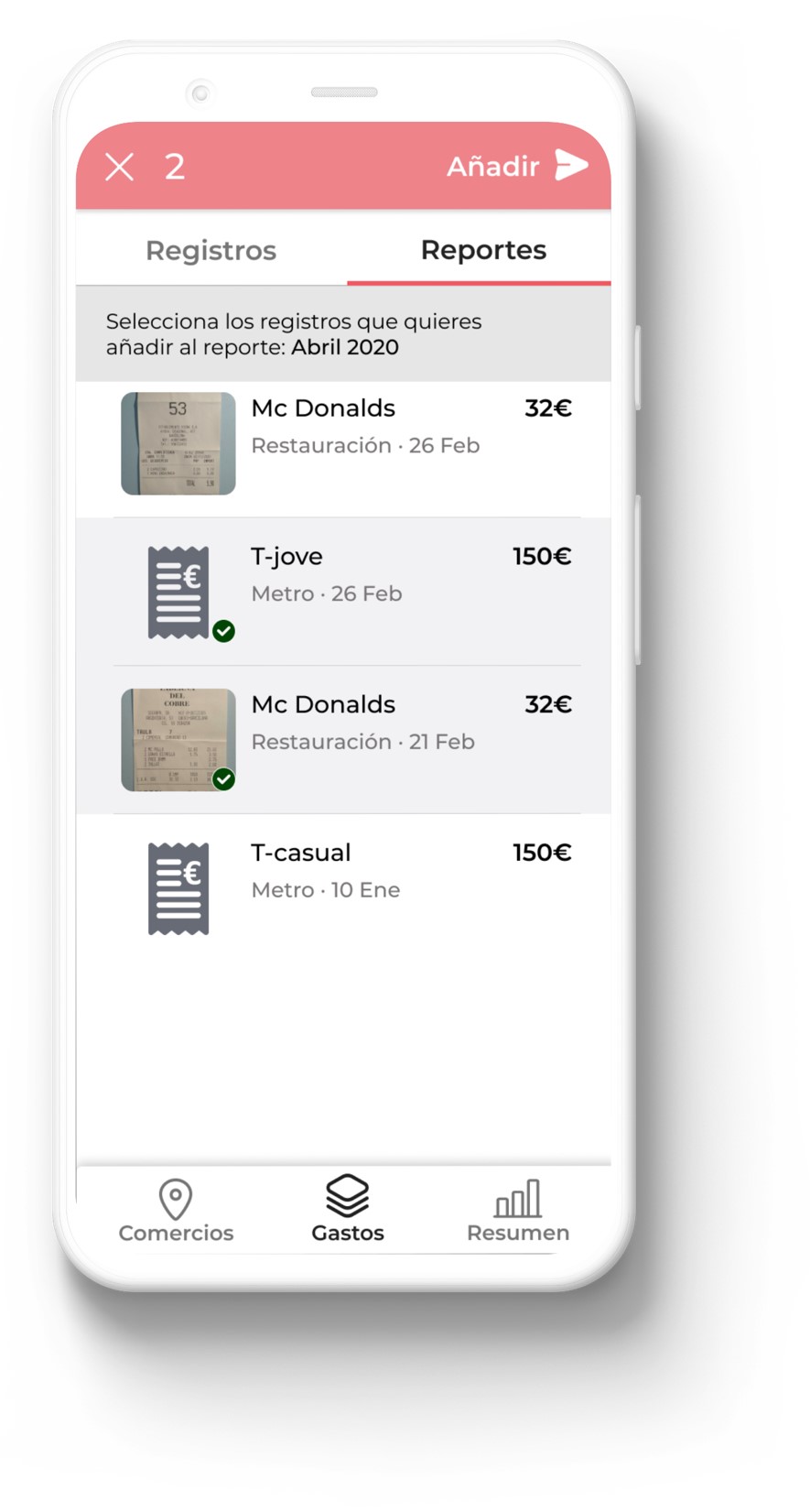 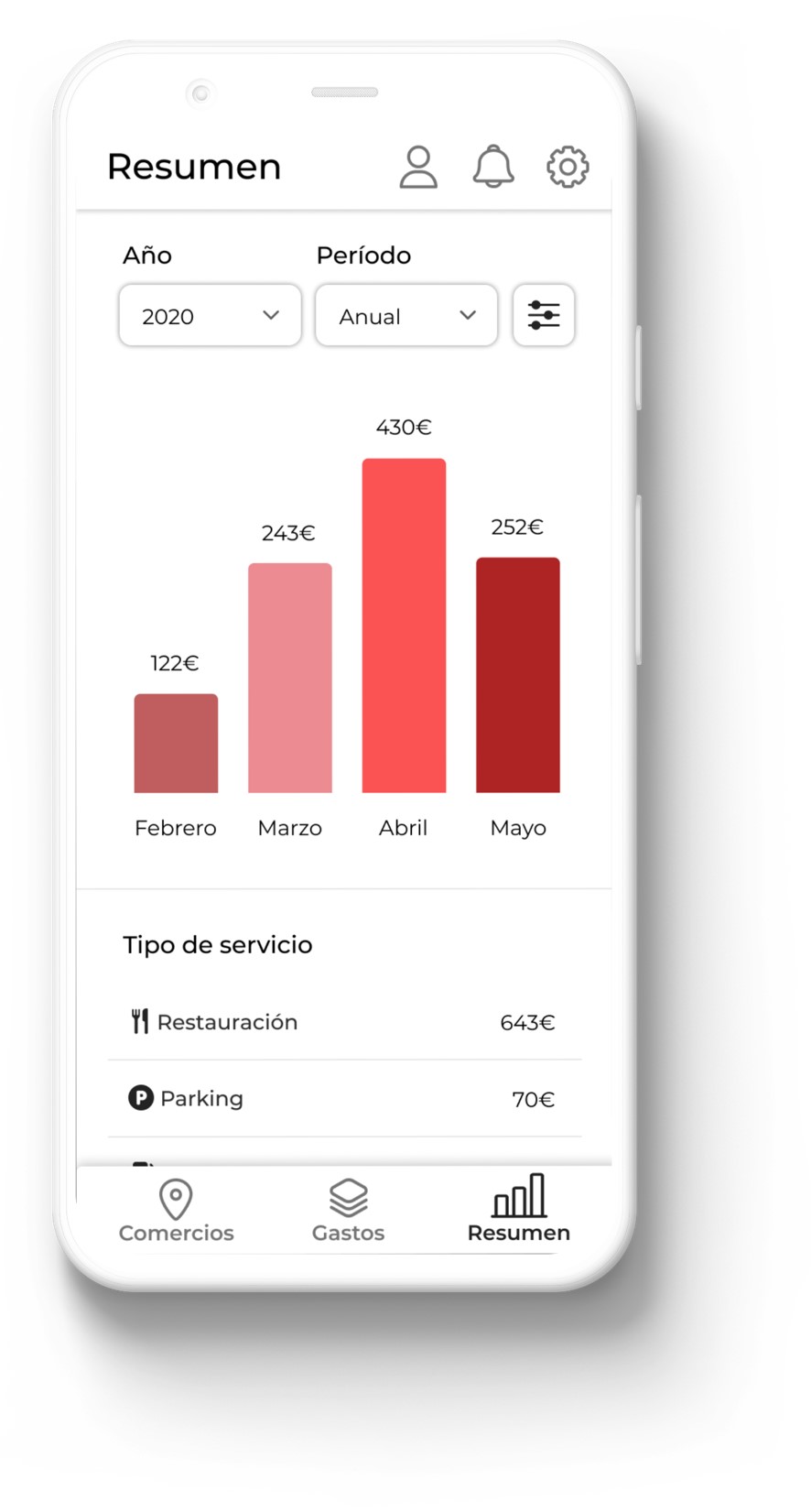 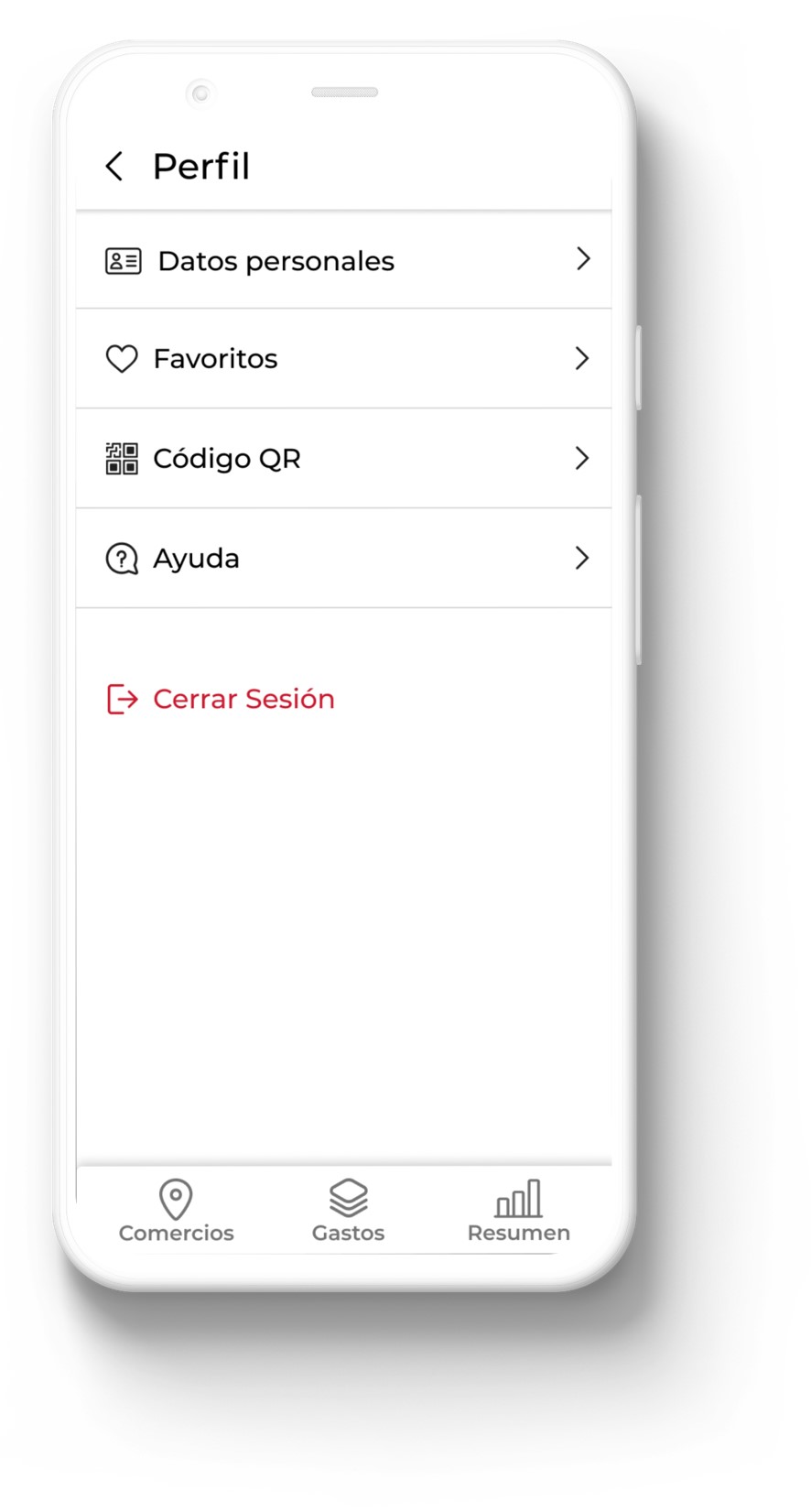 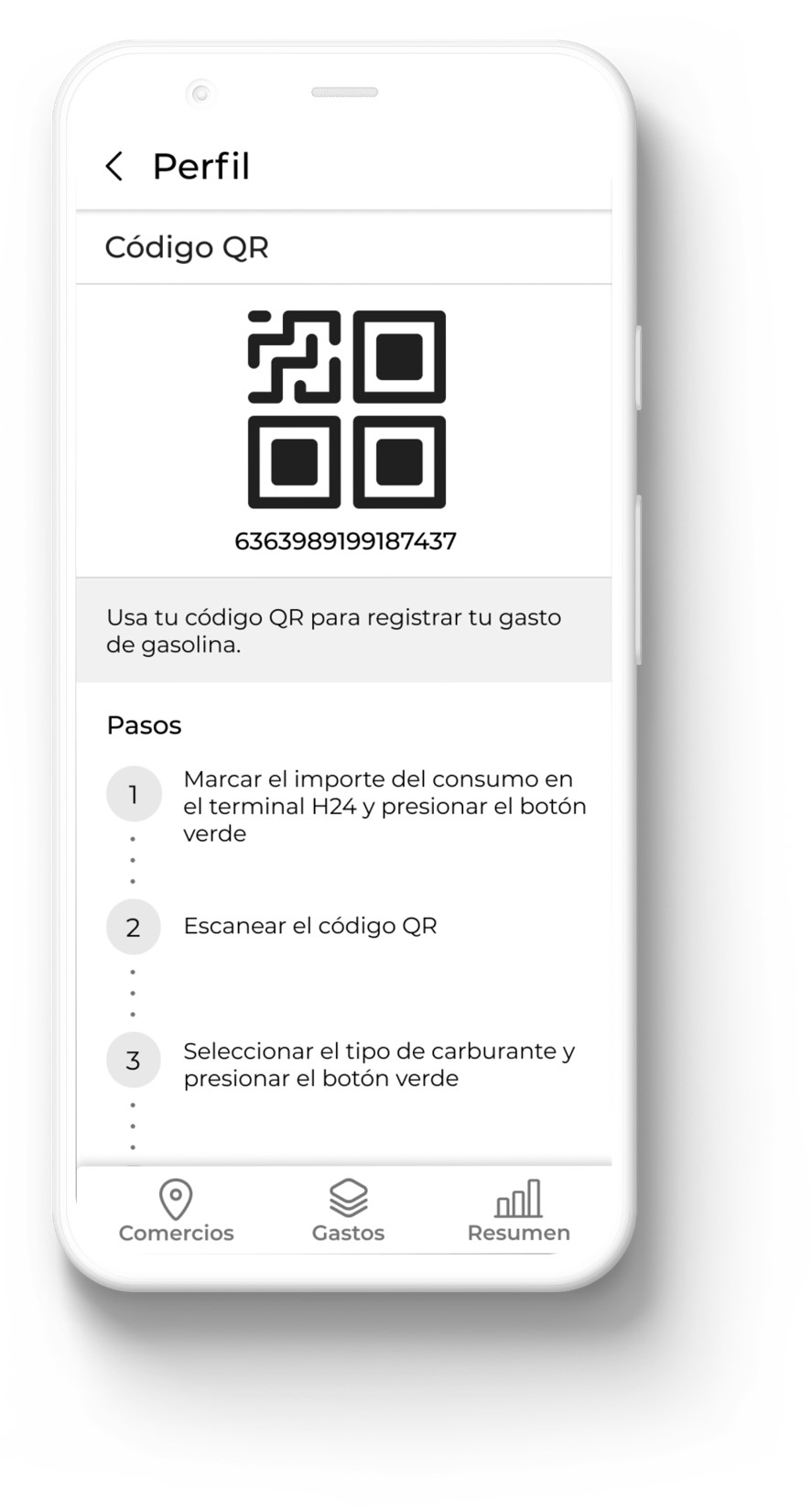 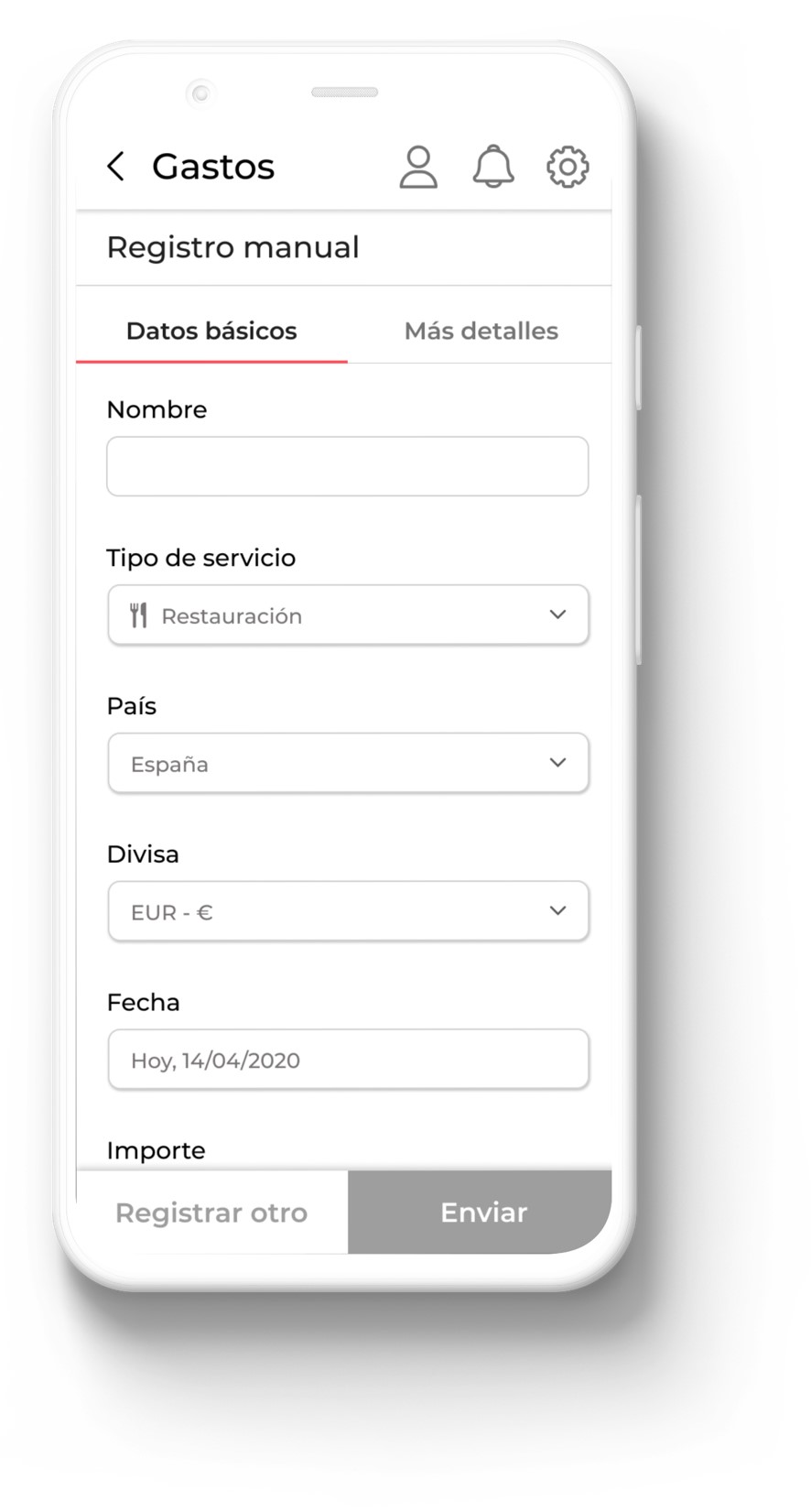 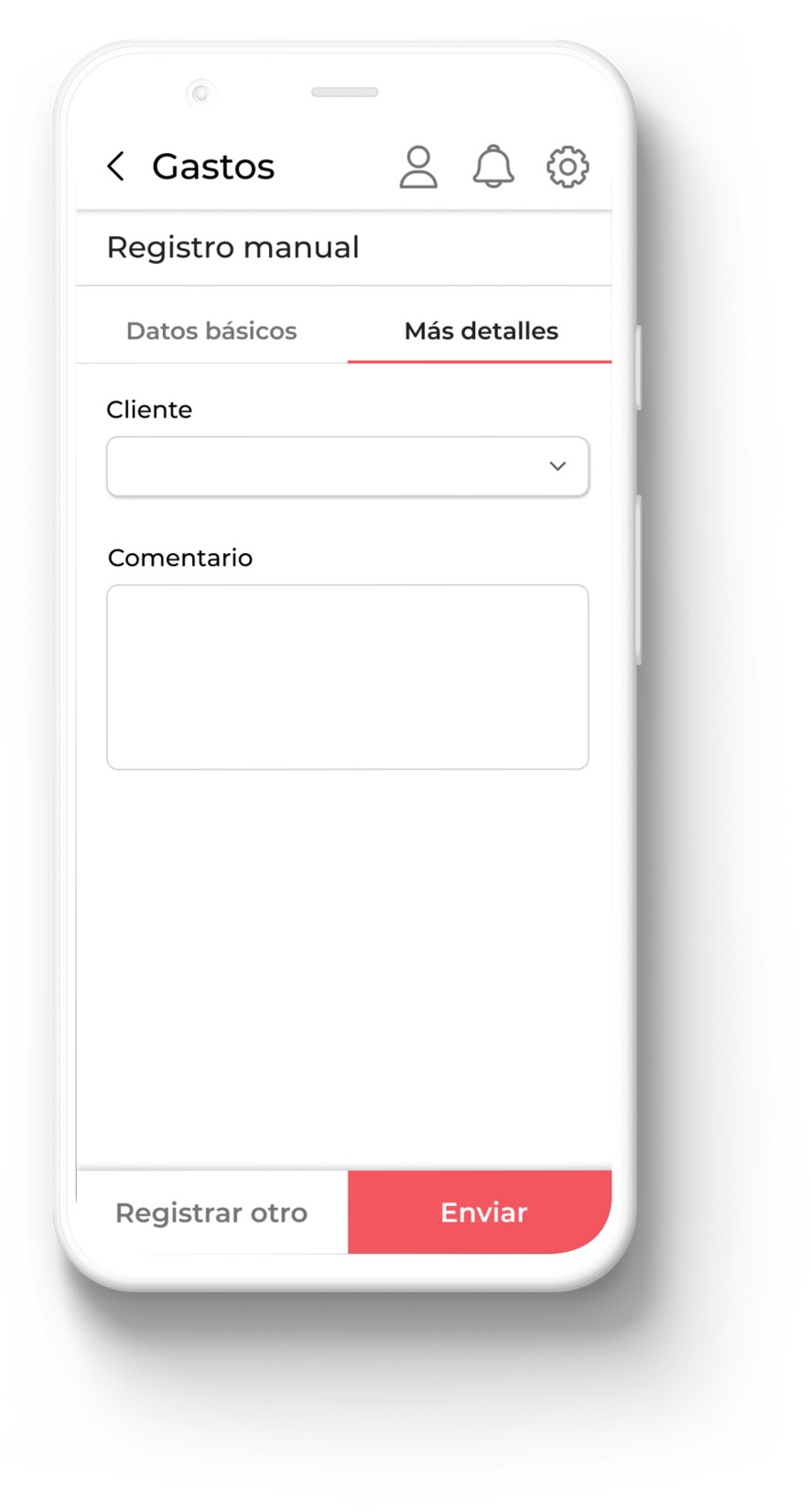